These are the words of Sushanth Babu. He is from India, but currently he is working at Bang&Olufsen in Struer and he has received Danish lessons for seven weeks via the CLAVIS online program. You can participate in the tuition from around the world – you just need a computer with internet connection – and if you miss something, you can do it later – when it fits your schedule.

- It’s a good start. We have basically done module 1. In spite of missing a few classes I could always listen to the recording sessions and try and catch up. So that was good.

On the other side of the Atlantic Ocean, Sushanth’s classmate is sitting. It is Chris Collins, who works as a doctor in the United States, but since his wife is Danish he also lives a lot in Denmark, and he therefore wanted to learn Danish. However, he was challenged on time;

- I looked up some of the other traditional courses, called them, and got dates for when you they expected in person classes and stuff. I compared them to my schedule and it just wasn't going to work. So we were very excited when I stumbled across this course and saw, that the entirety was done online – except for the final examination, tells Chris Collins.

To Chris it’s much about the flexibility, of teaching online, and not having to sit in the classroom early morning or late afternoon.

- I think it's a good time of day with three kids. It is after the dinner but before I have to start getting kids to sleep. So it’s perfect, says Chris Collins.

Time means a lot for Sushant Babu too, as well as the fact that he doesn’t have to physically show up somewhere;

- First of all, it’s the duration of the program. It’s one hour and fifteen minutes. in other classes you need to be there in person and they are about two to three hours. I don't have the time and energy to attend classes for that long, and you also have to factor in how much time it takes to get to class. You have to spend time commuting. So overall, it helps me save time, explains Sushant Babu.

Both Sushant Babu and Chris Collins agree, that they would choose online education at any time.

- It’s just so convenient. The platform is approaching a regular classroom, it just works so well, ends Chris Collins. 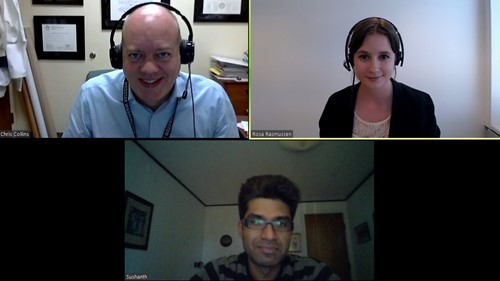